A brief history of the flag-raising and Catamount, excerpted from COLRAIN: A History, by Belden Merims.


Raising the flag
Again, war with England threatened in 1812. Of the two major parties, Republican Democrats supported “Mr. Jefferson’s War,” and the Federalists opposed it. On Catamount, the steep, rocky southwest corner of Colrain only recently settled, the populace, some 50 families, was largely Republican. Before he marched off to war, Amassa Shippee sought to inspire others by raising a flag on the tiny schoolhouse there. Few had seen the American flag, which had only flown in battle, but Shippee described its design to his wife Rhoda and other women , who wove and dyed and sewed the fabric. Shippee cut two pine trees for a mast. This was the first American flag flown over a schoolhouse, or any public building. In years to come Colrain would celebrate this event in re-enactments, poetry, art and parades.

Catamount
In the summer of 1875 many families who had left the rocky hills of Catamont for more arable land in New York and west returned to renew old friendships and to visit familiar scenes. They were welcomed by the remaining residents of the hill, who had prepared a picnic ground for the occasion near the “Dens.” So rewarding was the event that the Catamount Hill Association was founded to hold reunions every five years, beginning in 1880. The two-day events, with picnics, hikes, and the reading of prepared papers attracted participants from great distances, some camping, others staying with old friends and relatives. In 1912 the Association held a centennial flag-raising at Hillside park. Though Catamount is empty of residents now, the reunions of its descendants continue to this day. 2012 will mark the bi-centennial of the flag-raising, which will be celebrated by meetings and a hike of the plateau led by Colrain historian Muriel Russell.

For more information on Catamount, and on Colrain’s history, see A History of Colrain Massachusetts by Lois McClellan Patrie, available at the Griswold Memorial Library in Colrain.

The Catamount Hill Association invites descendants, folks interested in local history, and casual hikers to visit the site where this historic event took place. Today a monument and flag pole mark the location of the original schoolhouse. 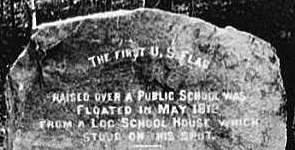 Stone marker commemorating spot where an American flag was first raised over a school. This is located on Catamount Hill in Colrain, Massachusetts